January 2022 Analysis of the underwater volcanic eruption in the Tonga Islands, South Pacific 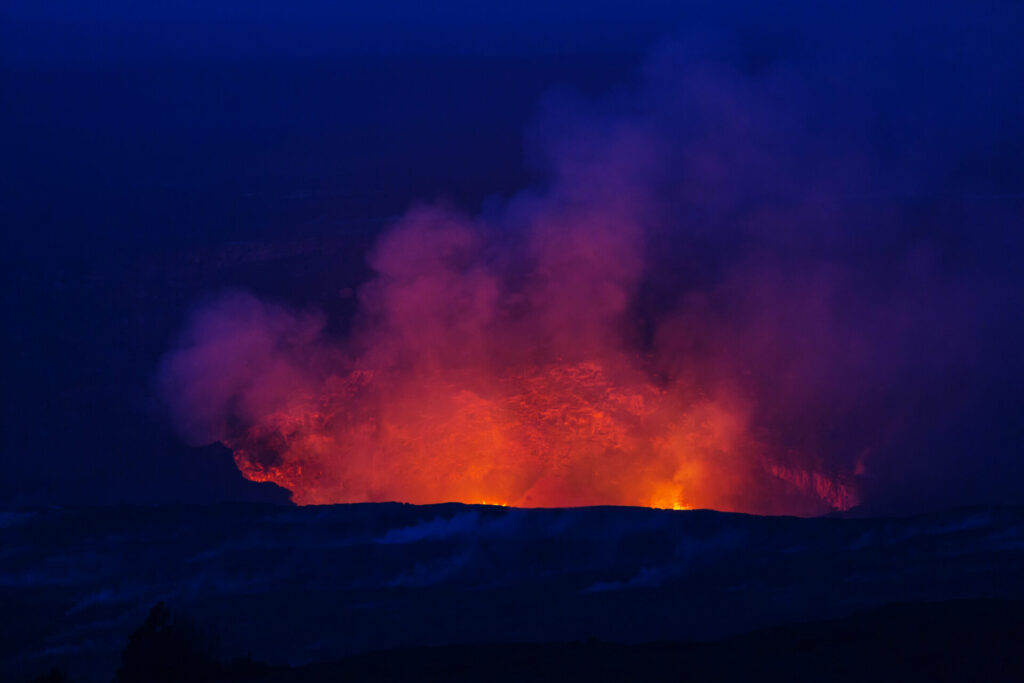 On 14-15 January 2022, a powerful volcanic eruption occurred at the Hunga Tonga-Hungaha’apai volcano in the South Pacific island nation of Tonga. After the massive eruption on 15 January 5 p.m., local time, the volcanic plume rose to a height of about 20 km and spread over a 240 km radius. The shock wave caused tidal changes in Peru, the United States and many other countries around the world. In Japan, a tsunami warning was issued just after midnight on the 16th. The tidal changes have caused widespread floodings in local areas, as well as major power cuts and disruption to communications. We would like to express our deepest sympathy to all those affected and our sincere wishes for your safety and the speedy recovery of the affected areas.

Synspective’s disaster analysis team conducted an analysis of the eruption situation at Hunga Tonga-Fungaha’apai volcano. Four separate Sentinel-1 SAR satellite images were taken between early December 2021 (before the eruption) and 15 January 2022 (after the eruption) and were used to analyse changes in the shape of the island and its surroundings due to eruptive activity.

This analysis utilizes data based on the scattering intensity*1 of radio waves from SAR satellites. The polygons in the blue frame indicate changes that may have occurred around the island as a result of eruptive activity.

*1 Scattering Intensity: Microwaves emitted from the SAR sensor are scattered to detect physical properties on the Earth’s surface. Surface roughness has a large impact on scatter intensity. 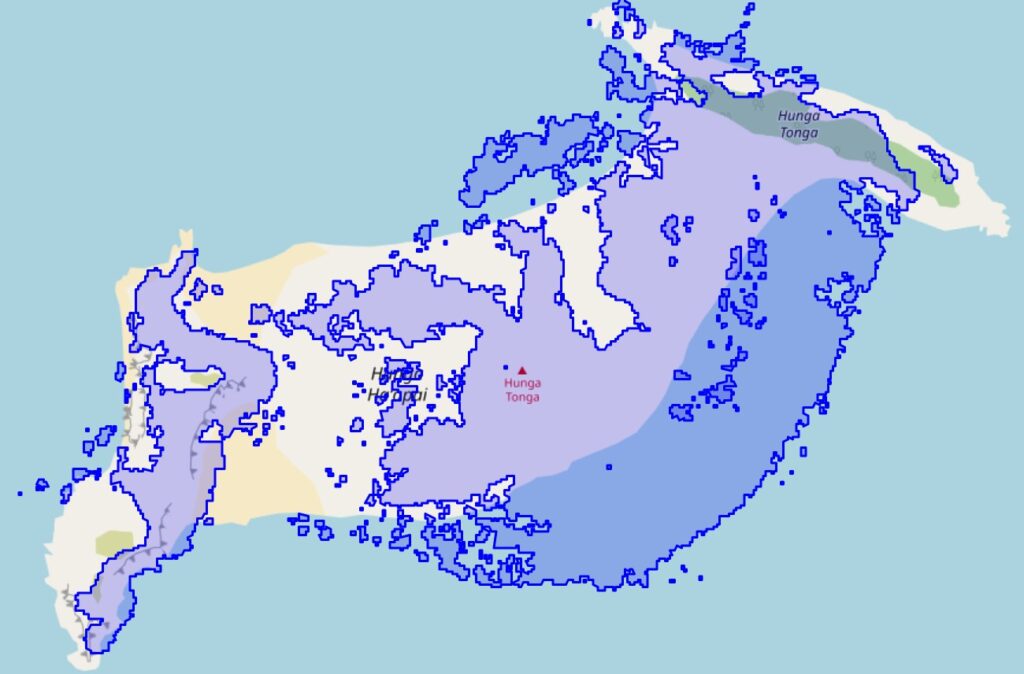 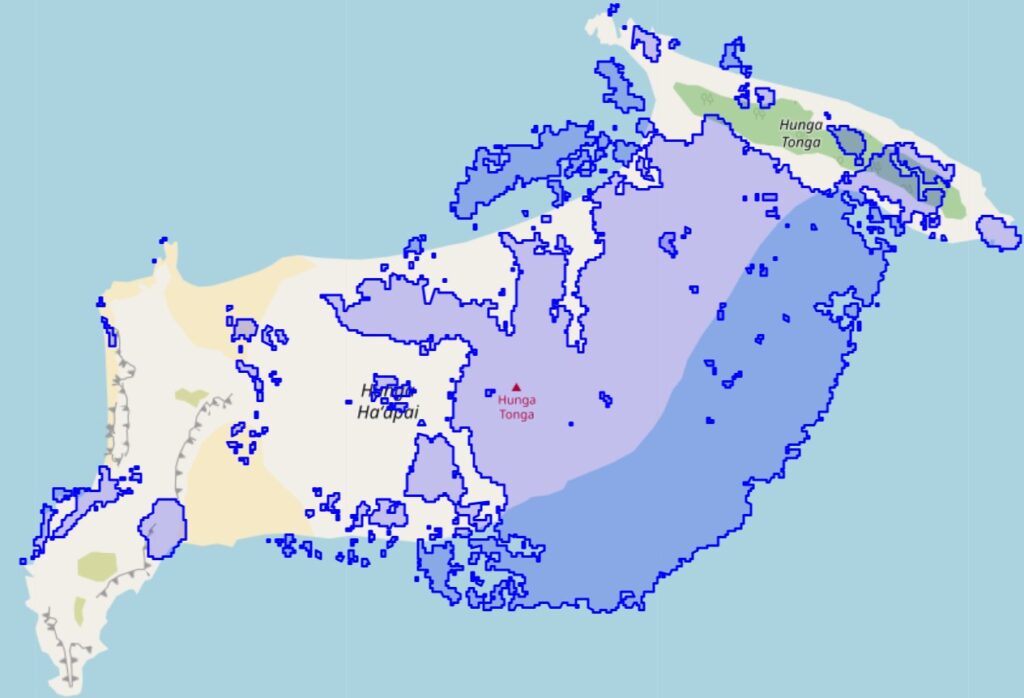 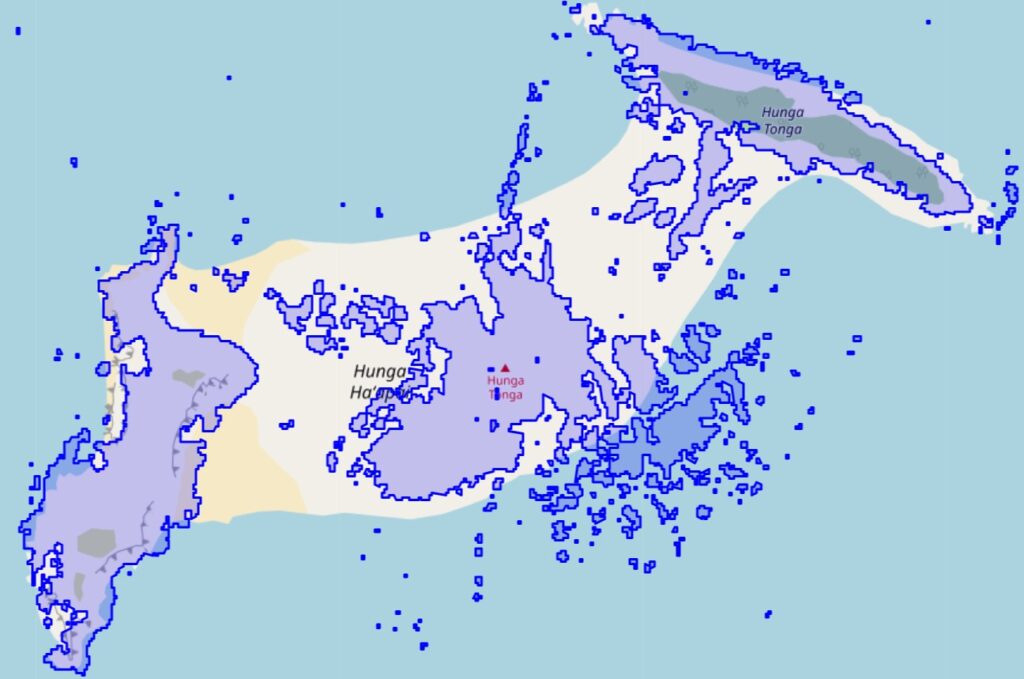 The results of analysis using SAR satellite images taken before and after the eruption of the submarine volcano show that the shape of the area around the island has changed over a long period of time due to eruptive activity. The first result suggests that the first eruption occurred on 20 December 2021 and that the island was enlarged at that time. The second result suggests that the eruption activity subsided during the holiday season, and the size of the island decreased. After the massive eruption on 14 and 15 January, changes all over the island were detected. We will continue to examine the results of each analysis in order to develop more accurate algorithms.