Pakistan’s monsoon season of record-breaking rainfall and melting glaciers in the northern mountains have led to massive flooding across the country this summer. Water has inundated a third of the country and has caused extensive, ongoing damages. We would like to express our sympathies to the millions of people who have been affected and sincerely hope for the earliest possible recovery.

Synspective has analyzed the flood damage throughout Pakistan using the Flood Damage Assessment (FDA), which is capable of making quick assessments over a wide area. Using a Sentinel-1 SAR satellite, we captured observational data that targeted severe damages around the Indus River in southern Pakistan at 1:26 am (UTC) on August 30.

The estimated flooding area based on the analysis results is shown below
(represented in blue). 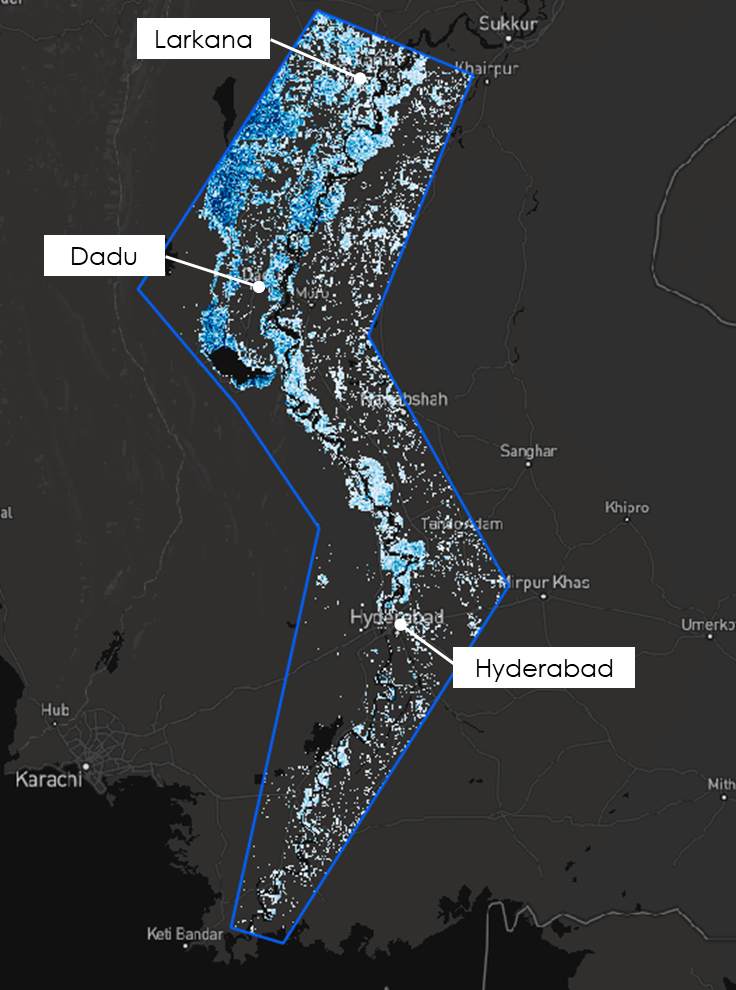 From FDA’s results, it is presumed that flood damage has occurred over a wide area. This is mainly located in the Indus River basin, from the vicinity of the Indus River mouth in southern Pakistan (which is the subject of analysis), to the vicinity of Larkana (within the blue frame in the above image). Also, large-scale flood damage has been confirmed in urban areas, including Hyderabad, Larkana, and Dadu in Pakistan’s southern Sindh Province. There are concerns that local residents are facing extensive damages.

Differences from Other Observational Data

In the event of a disaster, being able to respond quickly with accurate and reliable information is necessary.

Synspective develops and operates SAR satellites to provide data analytics and solution services. SAR satellites are capable of high-frequency, high-resolution observations in all-weather conditions at any time of day or night. Two of our StriX series satellites have already launched and are operating in target orbit. We aim to build a constellation of 30 SAR satellites in low earth orbit by 2026, enabling observation of target areas within two hours anywhere in the world.

Unlike traditional observation methods using optical satellites, aircraft, and drones, SAR satellites are capable of all-weather ground observations, making it possible to quickly capture flood damages over a wide area. Furthermore, using cutting-edge machine learning methods, it is possible to capture the depth and extent of floods on facilities such as roads and buildings.

Integrating SAR satellite data into FDA, it will be possible to capture flood damage even more quickly in the future. Public institutions will benefit from the ability to use data to prioritize support and rescue missions and other relief work.

Analyzing the flood damage from the Rokkaku River in Saga Prefecture (Kyushu).

Previous Synspective’s Third SAR Satellite “StriX-1” Successfully Reaches Its Target Orbit
Next Article For the third consecutive year, Synspective has been selected as one of the 10 most promising Japanese startups by LinkedIn